We are very conscious of the current situation regarding COVID-19, also known as the New Coronavirus.
We understand that the organisers of the F1 British Grand Prix weekend are still going ahead with the event at this time. If the situation changes we will update all booked clients as quickly as possible.

For more than 12 years, we have offered a range of VIP hospitality experiences within the ticket-line at Silverstone for the F1 British Grand Prix. Along with events such as the F1 Monaco Grand Prix, Monaco Historic Grand Prix and BTCC around the UK the British Grand Prix has always featured in our calendar as one of our most popular events.

Almost all of the images featured on our website have been shot in the past couple of years from our range of hospitality locations - mostly by our boss, who is on site over the weekend to ensure that the hospitality we offer for the F1 Silverstone experience is always top notch!

Scroll down and click the links to find out more about the locations we are delighted to offer at the 2019 F1 Rolex British Grand Prix, Silverstone. Don't see what you're looking for, or have a questions about any of our Formula 1 hospitality options? Just get in touch with us - our contact details are at the bottom of every page.

For many of the race teams, the Silverstone Grand Prix weekend is their 'home race'. Mercedes-AMG is based at Brackley, Red Bull is at Milton Keynes, whilst Williams is in Oxfordshire - at Grove. Of course, Force India is based opposite the circuit entrance, so it's just a short walk for team personnel to attend the race! Renault are another in Oxfordshire, with McLaren located just outside of Woking - little more than an hour away. Even the American team Haas has a European base around 30 minutes from the circuit.

All of these 'home' teams means a lot of home support, and the British Grand Prix is one of the best attended around the world with all 3 days normally sold out.

Silverstone has also been on the calendar longer than any other race in Formula One history, having recently celebrated the 70th anniversary of the British Grand Prix. The maiden F1 World Championship race was held in 1950. Whilst the circuit doesn't hold the record for the most number of races (that's Monza, followed by Monaco - due to race being shared initially with Aintree and then Brands Hatch until the 1980s) it sits in 3rd for the overall number of F1 races held.

The former airfield circuit is also very popular with the drivers, its fast sweeping bends providing a challenge of both man and machine. Whilst sections of track have changed over the years, the feeling of an old-fashioned perimeter road remains. Many corner names hark back to the circuit's former use (Wellington & Hanger straights) and local landmarks such as Stowe, Luffield, Abbey (actually Luffield Abbey - the remnants of which were found on the circuits' land) and Chapel, together with references to other UK circuits such as Aintree and Brooklands.

We'll have to wait for the final line-up, but staples of the programme for almost all European rounds of the Formula One World Championship are:

In recent years Silverstone has added both an historic race car parade and also a round of the FIA Historic F1 championship. We'll have to wait and see what additional track action is planned for race weekend.

Track action, both race and other elements such as the drivers' parade, air displays and more, are all visible from hospitality at Silverstone, so there's no reason not to book a VIP experience for the F1 British Grand Prix.

Whilst we won't receive the final timetable until a few weeks before the race weekend, we can surmise that the following 'features' will happen on each of the race weekend days:

With the later start time you will have plenty of opportunity to enjoy any of our British Grand Prix VIP Packages!

We are delighted to offer VIP hospitality in high-floor suites within the Brooklands Building. In our view possibly the best views at Silverstone!

You'll experience excellent catering and drinks package during your day.

Viewing is from the attached terraced balconies with views over the Wellington Straight DRS Zone, Brooklands Corner and the double-right-hander Luffield.

In our opinion, Brooklands offers the best British F1 hospitality packages at a great price.

It's fair to say that the Brooklands Suites at Silverstone are our favourite spot for watching the British Grand Prix and are perfect for experiencing the best Silverstone F1 hospitality!

The Formula One Paddock Club™ is the most prestigious hospitality package that Silverstone has to offer and is the only package at the 2019 FORMULA 1 BRITISH GRAND PRIX that includes prime viewing overlooking the main start/finish straight, five star dining and a pit lane walk at specially allotted times.

The Formula One Paddock Club™ travels to every Formula One™ Grand Prix on the calendar and uses the demanding standards of F1™ teams and sponsors as its benchmark – which is why it is always their first choice for entertaining clients.

If you're looking for the ultimate F1 hospitality experience, then Paddock Club is probably it!

Note that Paddock Club is available for 2-day, 3-day or Friday only packages. It is not possible to buy a 'Sunday only' hospitality ticket. 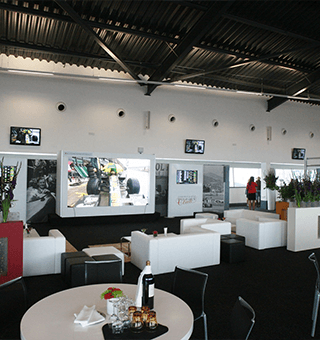 Silverstone F1 hospitality options are spread across the site in a mix of permanent structures and marquees. Viewing will vary according to location, with both Paddock Club and Brooklands offering balcony viewing. Ignition Club, the new name for Silverstone Six, offers a ground level terrace and also access to an exclusive grandstand. Paddock Club too offers a grandstand as the view from the balcony is limited. Meanwhile, at Brooklands guests just need to move a few feet from table to terraced balcony for superb views over the Brooklands/Luffield complex of corners.

Don't forget, these packages are great for corporate hospitality and also for individuals!

Your F1 Silverstone hospitality experience will include: 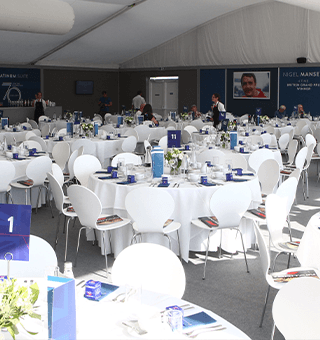 Want to know more about VIP hospitality, make an enquiry or just discuss your requirements?

Please note that our offices are in the UK
Alternatively complete the form to make an enquiry and we will respond during office hours.
By submitting an enquiry, you consent to us processing your data using our CRM system. We do not automatically add you to our marketing platform. You can signup for our marketing emails at MailChimp. For more information please see our Privacy & Cookie Policy.

NOTE: We are NOT Silverstone Circuits - we cannot help with general admission or grandstand seat enquiries.
The call centre for Silverstone can be reached on 0344 3728 300.